With rain falling on the red pines, an envelope of fog obscures the view beyond the tall trees lining our shoreline. From the french doors in our bedroom, grey light fills the room. CBC Radio 2 plays softly in the kitchen. A cup of coffee sits at my bedside table. It is a blissfully peaceful morning.

Beside me, our baby girl sleeps soundly, as newborns do. Her perfect lips are pouted into a kiss, her long fingers lay relaxed against her body and her delicately fine eyelashes are barely visible against her fair skin. I am totally in love. The wait was definitely worth it! 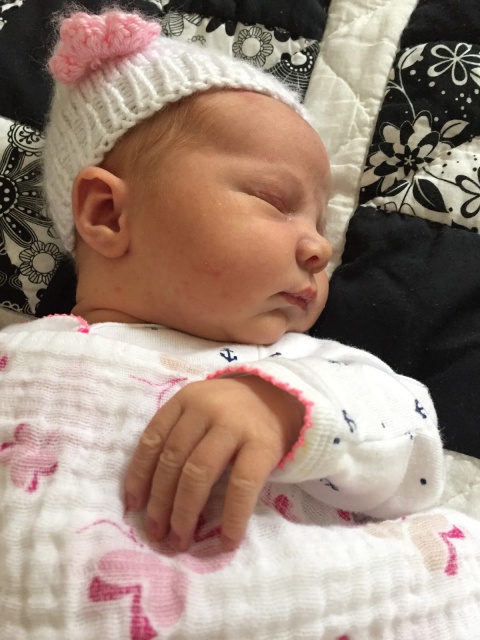 Alice Harriet Van Winckle charged her way into the world on March 5th at 7:17pm. She was stubborn to get going, but when she decided it was her time to arrive, boy was she in a hurry!

Unlike the end of my pregnancy with Henry, this time around, I had the sense that I was going to go into labour early and had booked my last full week of clinical work at 37 weeks. After that, I only did a few teaching sessions a week up until my due date. Once my due date came and went, my bewilderment at still being pregnant rose. I had never mentally prepared for being overdue! In retrospect, it was a wonderful thing as I had almost three full weeks off to enjoy Henry, be at home with Blake and to prepare myself for Alice’s arrival. At the time, though, as any heavily pregnant woman can attest, I was mentally done with carrying around this tight basketball of a belly and was determined to get myself into labour.

Of course, Alice had other ideas.

If you ask any midwife or maternity health care provider ways in which one can kickstart labour, many age-old options will be presented. Some do actually have evidence behind them, while others have been used for centuries and are backed by anecdotal and variable stories of efficacy.

I had already been out daily for hour-long snowshoe treks across the frozen lake for the last two weeks of my pregnancy, Blake was heavily dosing my dinners with Siracha sauce and I had been attended by my dear friend and physician, Lianne for regular cervical sweeps. These efforts had been met with variable success – at 40 weeks, twice I had had nights where I had been awakened by regular contractions, but each time, by sunrise, they had spaced out and stopped altogether.

At 40weeks and 3days, I was getting desperate. At the advice of my lovely midwifery girlfriends Amanda and Christine, I went out and bought two bottles of castor oil – something I never, ever thought I would do!

For those who don’t know, castor oil is a laxative that has been used for decades by midwives to induce labour. The idea is that it causes smooth muscle irritation, leading to diarrhea then indirectly causing uterine irritability and, hopefully, labour. My association with castor oil however, comes from my late Grandpa Sprague who was given it when he was a child. He always joked that if he took his castor oil, he was rewarded with Spumoni ice cream – his favourite!

Committed to getting my labour started, I armed myself with chocolate milk, castor oil, Gravol and Immodium.  In order to increase the chances of this concoction working, Blake and I enlisted our friends to recreate the same scenario of when I went into labour with Henry – dinner out at one of the local restaurants followed by drinks and darts at the local Legion 🙂

While Henry’s favourite babysitter, Blythe put Henry to bed, I chugged back a sickly mixture of chocolate milk and castor oil. Ugh. I don’t think I’ll ever be able to get the taste out of my memory. As my girlfriend Christine described it, it is like drinking a melted, unflavoured Chapstick. Blech! Then off we went to dinner where Blake, committed to his role in this endeavour, promptly started ordering double Rum and Cokes. This was going to be an interesting night!

Hours later, we were having a great evening with our friends and everything was going to plan, except no labour pains! How could this be?! By midnight, we had played shuffleboard, darts and Blake was definitely drunk. It was exactly the same scenario as when I went into labour with Henry, but alas, Alice was not keen on cooperating. Eventually, we went home, deeming the castor oil to be a complete failure.

The next day, I met up with my doctor Lianne, at the hospital. After some discussion, Lianne agreed to induce me with a gel that commonly is used to soften the cervix and get labour going. Within 30 minutes of being ‘gelled’, I knew that FINALLY we were getting somewhere! It was a bright, sunny beautiful spring day. A perfect day for a baby to be born 🙂

I drove home from the hospital shortly after 3pm and by the time I arrived home, I was already pretty uncomfortable with regular cramping. My friend Catherine and Meghan, my brother John’s partner, met me at home. Seeing how uncomfortable I was already, Blake made the executive decision to head into town to Cat’s house which was much closer to the hospital. We called Blythe and within a few minutes she arrived to take care of Henry (she’s amazing!) and off we went into town.

Anxious to keep my contractions going, we walked around outside in the beautiful sunshine for quite awhile before I started to get tired. By 5pm, I was ready for a break and got into Cat and Caleb’s tub. It was heavenly to be in the warm water with music playing – so relaxing that my contractions started to space out!! I couldn’t believe it!! This baby was such a trickster.

So, out of the tub I got and up and about the house I walked. Blake and I even arm-wrestled (while he ate his pizza) to try to get things going again. At 6:30pm, my contractions had completely stopped. I was so disappointed. I got my jacket on and was about to leave to get home to Henry, when my brother John who had a night shift at the hospital at 7:30pm said, “sit down for ten more minutes until I have to go to work”.

This was the most serendipitous thing that he could’ve have said!

I sat back down and within a couple of minutes, out of nowhere, my water broke! It was 6:50pm.  I jumped up in surprise, my pants and socks drenched. I remember Cat trying to hand me a tea towel before running upstairs to get me a change of clothes. Blake, had another agenda. “In the car, now!”, he ordered. Knowing how quick my last labour was, thank goodness he was on top of things. I managed to get out the door with a towel, one sock and boots undone. “This is where things get crazy”, I remember Blake saying to Meghan who was in the back seat. He was right. Instantly, I was floored with VERY, very strong contractions. I begged Blake to step on the gas while texting my MD, Lianne with the news.

Within minutes, we had arrived at the hospital and I had been ushered into a Labour and Delivery room. When the nurse checked me, I was only 4cm. I couldn’t believe it. My contractions were so strong, I definitely had thought I was further along. At this time, I was beside myself with the pain. I couldn’t lie still as the nurses tried to monitor the baby and start an IV. I was being a terrible patient for my colleagues!

Apparently, I had reason to be yelling out in pain since, within a few minutes, I had progressed to 7cm and was fighting a very strong urge to push. Catherine and Meghan were at my side trying to keep me calm. Blake, meanwhile was in the hall with his ‘male doula’ and good friend Caleb, as well as my brother, John. He was texting my doctor, Lianne with updates, as she, unbeknownst to us, was driving like a drag-car racer through our small town trying to get to the hospital.

Luckily, Lianne made it in the nick of time. With my next contraction, my body took over and began to push. Things were happening so quickly and I was completely unaware of what was going on around me. I tried to focus on Lianne’s voice as she directed me through the final stages of Alice’s birth.

Within a few minutes of pushing, Alice had made her grand entrance into the world. From start to finish, my labour had only been about 30 minutes long.  As Lianne placed the squirming baby on my belly, she exclaimed, “It’s a girl!”.  I held her tiny body on my chest and stared up at the faces around me in disbelief. A girl! Meghan, Cat, Lianne, and my amazing nurses Hannah and Kim were all cheering. I cannot begin to describe the sense of joy and relief that it was all over.

John cut the cord and soon thereafter, I was nursing Alice while sipping my celebratory chocolate milk. Blake and Caleb toasted each other with scotch in the corner of the delivery room. Over the next hour or so, we celebrated, chatted, took pictures and cooed over baby Alice.

As someone who provides maternity care to First Nations women from remote fly-in communities, where more often than not, women are delivering their babies away from home, without their partners, families or friends, the warmth, love and support that I felt in that delivery room was not taken for granted. I am truly beyond fortunate to have been able to bring two babies into the world in a country with free medical care, in a town where people are constantly going out of their way to help and in a community hospital, where the care is exceptional and even the cleaning staff recognize you and congratulate you!

Since being home, we have spent a blissful few days hibernating. I am doing my best to soak Alice’s newness all in and to cherish the cuddles, the smells and the adorable facial expressions. We are all adjusting to the changes around our house and so far things are going fairly well! Henry is still attending daycare in the mornings and we have tried to keep Henry’s routine more or less the same. Blake has stepped up to the plate in a huge way and has been doing the bulk of Henry’s care – getting up in the morning, feeding him, keeping him happy, taking him to daycare, etc. This has been a huge relief for me as I was previously so anxious about how I would manage to care for two babies at once! Interestingly, Henry has become less clingy with me and hasn’t seemed to really take notice of Alice’s new place in the family. He has been giving her lots of hugs and kisses, as well as very aggressive ‘pats’ on the head, pokes to the eyes and ear pulls. She’s going to grow up to be a very tough lady 🙂

We have also been so blessed to have fabulous friends and family who have helped us tremendously this week. A special shout out goes to Meghan and John who have brought us food, flowers, ice cream and who have helped out with Henry too. It’s been so lovely to have them here in Sioux Lookout.

Thanks as well to everyone who has supported and congratulated us virtually by email, Skype, FaceTime, Facebook and phone.  It means a great deal to us and we hope that you’ll continue to follow our chaos and adventures in the North with now four in the canoe! 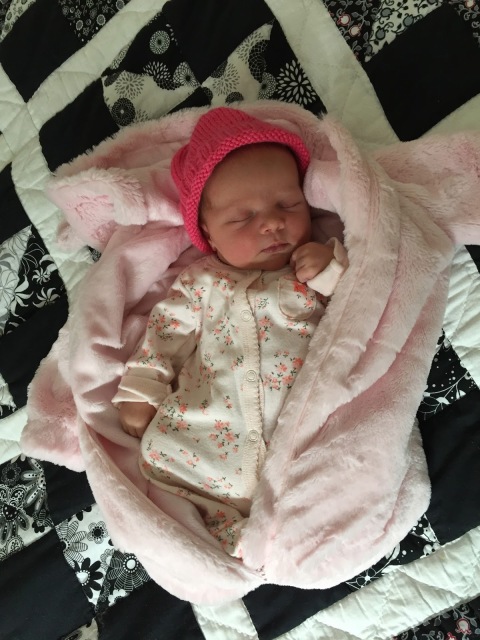