Posted on April 1, 2016 by lifeonabramlake

Out of the silence, a tiny wail erupts from the bassinet beside the bed. Gritting my teeth, I breathe deeply, fighting the urge to yank the pillow over my head and ignore the newborn cries. Throwing back the blankets, I drag myself out of bed for the umpteenth time that night. The clock on the bedside table glares an angry red. 2:50am. Ugh. Alice has been asleep in the bassinet for a grand total of 13 minutes. 13 minutes!!!

Over the past two hours, I have been nursing, changing, burping and rocking this flailing, tiny human. Three times, I have attempted to place her into her bassinet to sleep. Each time, after being absolutely sure that her fragile eyelids were closed, I have crept ever so slowly to the bassinet, held my breath, said a little prayer and then gently placed her into the lambskin-lined bassinet. Each time, however, as soon as her head touched the lambskin, her eyes have popped open and her limbs have started flailing about. It is as if I have been trying to place her onto a bed of hot coals, not into a safe, quiet and deliciously soft cloud. A maddening affair. After muttering a string of curses into the darkness, I then start the whole process again.
Each morning, however, as dawn breaks, it is like an amnestic fog lifts. The night is like a blurred memory marked only by swaddling blankets strewn on the floor, nursing pads scattered on the bed and diapers draped across the change table. The clips of my nursing top hang undone and my hair is all askew. It is as if Alice and I emerge from the bedroom after a night of battle. Each morning, however, I look at her beautiful face, with her bright blue eyes wide open and I shower her button nose, pouted lips and impossibly soft hair with tiny kisses. My anger, frustration and rage melts away.
What a funny thing parenting is.
The past three weeks since Alice’s arrival have been an adjustment for all of us. Thankfully, all of my nights of worrying during the last few weeks of my pregnancy have been for naught. The transition from three to four has not been a bed of roses, but it has certainly gone better than I had expected! This has largely been because I am incredibly fortunate to have Blake at home with me. We have taken the divide and conquer approach to having two babies under a year and a half. Blake has moved himself into the guest room to ensure that he sleeps in order for him to get up each morning with Henry, get him breakfast and off to daycare. This has helped me tremendously. Often, if our night has been particularly rough, I keep the bedroom doors shut and sneak in another hour of sleep in the morning with Alice, as I listen to Henry and Blake chatter away. It has made all of the difference.

Unfortunately, Alice has developed a nightly routine of fussing/screaming for hours on end, usually from 6-9pm. It has been challenging as the evenings are a busy time getting Henry fed and to bed, not to mention Blake and I trying to eat a meal together. I hope it passes soon because as every parent knows, rocking, bouncing, shushing etc. for hours on end is indeed torture!

Although Henry has had his moments, for the most part, he has been a fabulous new big brother. He will often run into the bedroom looking for ‘baby’ and gives her lots of hugs and kisses. He hasn’t seem to be bothered by the fact that I am often nursing or holding Alice. He is much too busy to really care! 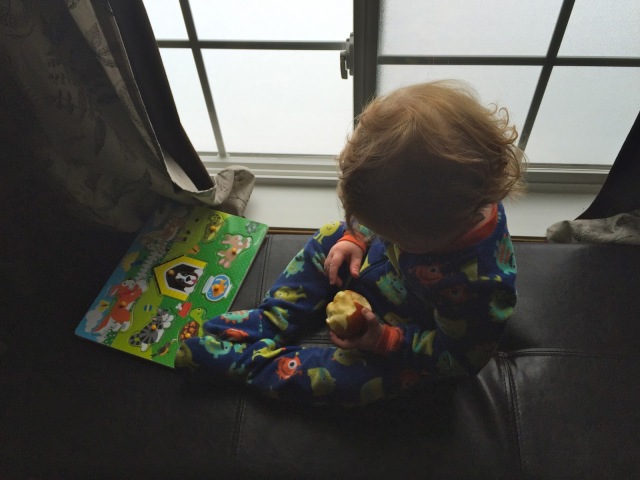 These days, Henry has been on the go even more so than usual. In addition to the zipline, Blake has built Henry a slide, as well as a rock climbing wall in his room to keep him busy. He is forever climbing – up onto the counters, the table, etc. Nothing seems to stop him or evoke any fear into him!

Here is Henry climbing up his wall!
https://goo.gl/photos/YhNeqKzVxvkk5sb89
Henry has also developed a new sense of independence over the past month or so. This has been accompanied by his new knowledge of the word, ‘NO’.
‘Henry, do you want to eat lunch?’
‘No, no, no, no’
‘Henry, do you want to play with your choo-choos?’
‘No, no, no, no’
‘Henry, should we go have a bath?’
‘No, no, no, no’
You get the picture.
Mealtime and bathtime have now become a bit of a struggle, as he is often busy playing or doing something he’s enjoying which leads to epic meltdowns. Also, as the weather has warmed up, we have been spending the majority of our time with both kids outside. Henry loves wandering the yard, playing in the sand on the beach and riding around in his push-car. The difficulty is getting him to come inside for dinner and naptime. Man, can that kid get mad! If it were up to him, Henry would be outside 100% of the day and night! Last night, Blake literally had to chase Henry around on his batmobile, spooning his dinner into his mouth as Henry jetted around the deck. He wouldn’t have eaten a bite otherwise! 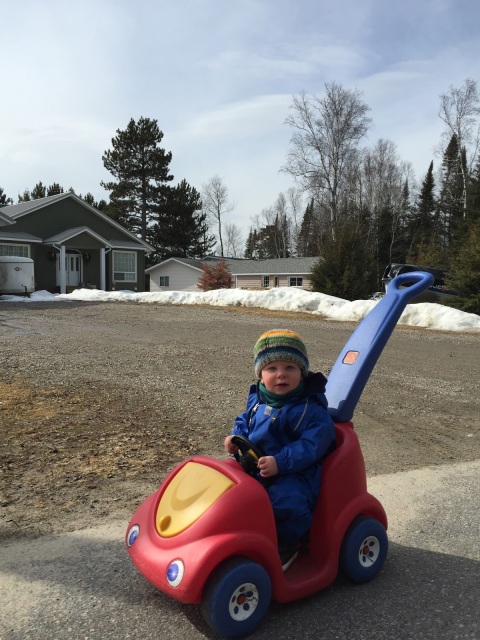 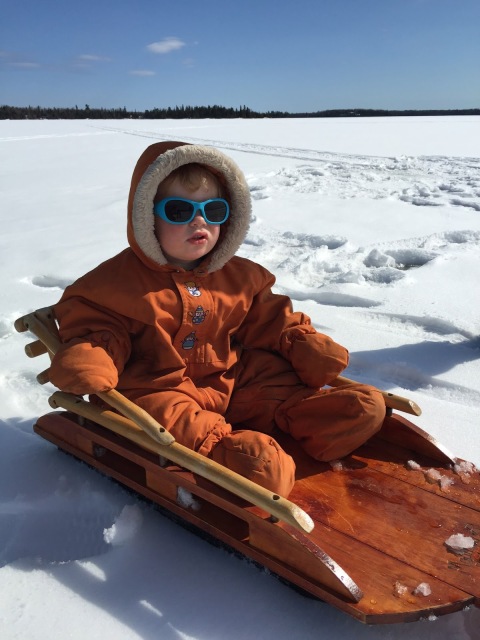 Despite these toddler challenges, Henry keeps Blake and I in stitches. Everyday, he wakes us up yelling ‘Eeee-iiii-eeee-iii-oooo! Dad-dad? Ada? All done?’ from his crib. When you go in to his room to get him up from his nap, he stands up, thrusts his lambskin up at you and says defiantly, ‘All done!’. He also has such a sense of humor and a weird love of spicy foods – so much so that when Blake feeds him straight hot sauce, he looks at us and laughs! As usual, he is still an adrenaline junkie that barely cracks a smile unless Blake throws him up to the ceiling, flips him onto the bed or pushes him at a full-out sprint in his car or in the Chariot stroller. I can only imagine what kind of craziness he will get into as a teenager!
Henry being thrown into the air by Blake…
Henry eating hot sauce!
Henry an Blake horsing around (and terrifying Mom)!
Here is a link to a clip of Henry going down his slide 🙂
https://goo.gl/photos/ehXBqxM9WXZDrFJM8 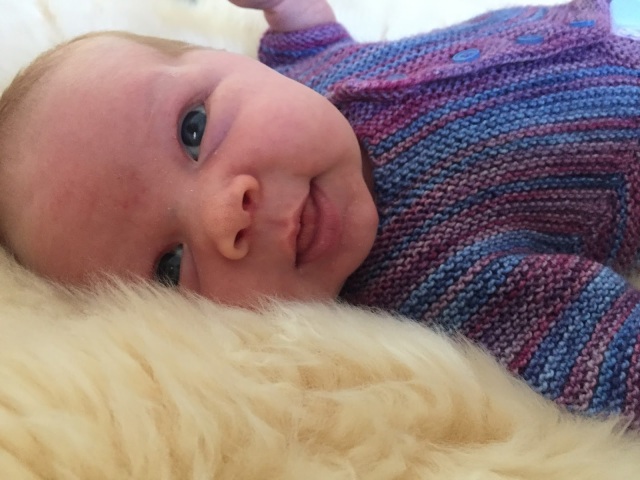 Anyway, these days, when people ask me what I did today, all that I really can say is that I helped keep two small humans alive. That is pretty much it. A whole day of nursing, changing, soothing and cleaning up after babies.  Cajoling babies to eat. Enticing babies to sleep. Singing to babies, getting slobbery kisses and peanut butter-smeared hugs from babies. Running, jumping and dancing with babies. Being overjoyed in one moment and enraged in the next by babies. Crying from babies, barking from dogs, pulling hair out, stress-eating and curling up in the fetal position when it is all just too much. This is our world. And I love it. I love it so much, it brings me to tears. No matter how many sleepless nights, frustrating toddler battles, impossibly long days and even longer nights fill our existence, I would not trade my world of keeping small humans alive for anything else!
Parenting, indeed, is a funny thing. 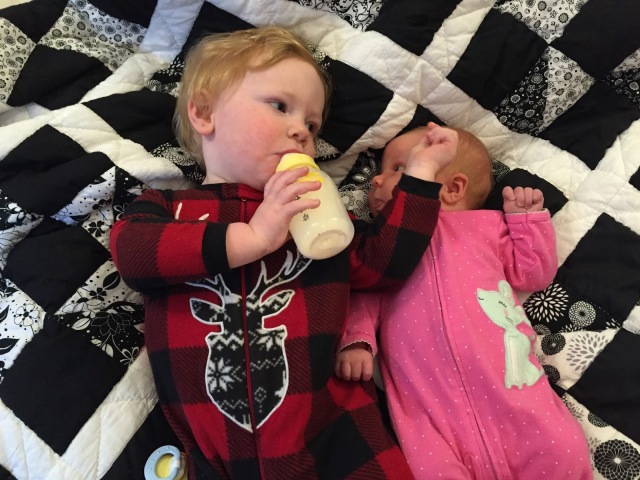