Posted on February 26, 2016 by lifeonabramlake

I can’t believe it, but I’ve almost made it to my due date. With only 4 more days to go, my nesting urges have gone into high gear. This week I have officially started my mat leave and so I’ve been at home and feel very oddly about having ‘free time’. I know that I am supposed to relax and catch up on sleep, but most of you who know me know that I have a ‘problem’ when it comes to doing just that. Instead, I have washed the floor no less than three times in a 5 day span and spent the entire morning cleaning the house. Again. To my credit, I did manage to make myself nap one afternoon while Henry was asleep and I have been out enjoying the beautiful weather snowshoeing on the lake with Ada. I even spent an afternoon reading on the couch!

Having a week off though has meant that Blake and I have been able to spend some time time together without Henry while he has been in daycare in the mornings. We even went out for coffee by ourselves! It’s also been fun to be at home with Blake and Henry and see what mischief they usually get up to when I’m at work.

Blake and Henry’s activities include:
1. Swinging in the Jolly Jumper harness
2. Blake throwing Henry around, doing flips on the couch, etc.
3. Henry zipping across the length of our house on his zipline – again, made with the Jolly Jumper harness and some rope
4. Watching ski videos which Henry loves and routinely asks for
5. Making smoothies together (while Henry sits in his high chair yelling for bananas and blueberries!)
6. And of course, skiing. Skiing, skiing, skiing.

As most of you know, Blake’s whole being and identity is wrapped up in skiing. He watches ski videos daily and is continuously planning ski vacations. So, it’s no surprise that as soon as Henry could walk, Blake rented him a pair of skis and got him out there regardless of the chilly January and February weather. 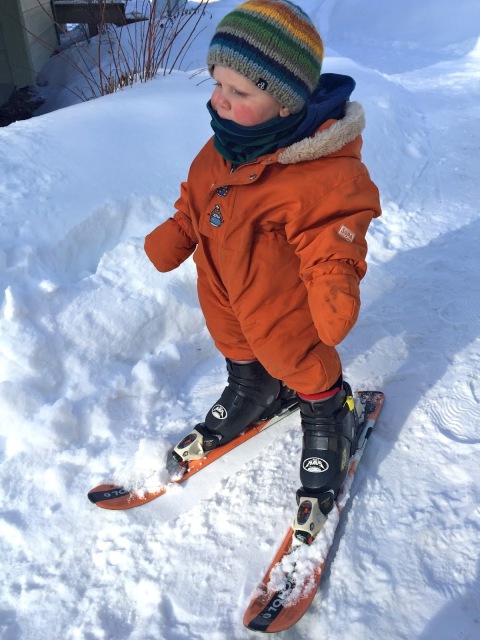 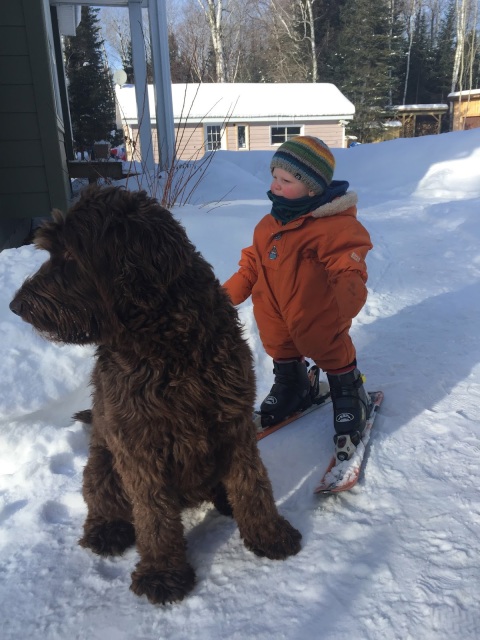 At first, Henry would ski down our footpath towards the lake while Blake or I hung onto his snowsuit. Quickly though, Henry picked it up and soon was going down the length of the path by himself. Then, without us teaching him, Henry figured out how to start on his own when he was ready at the top of the hill, turn and then stop himself by snowplowing at the end of the run! Both Blake and I were pretty amazed.

These days, if Blake even heads towards the door, Henry jumps up and follows him yelling SKI! SKI! He will pick up his ski boots and spend a great deal of time putting them on and off by himself in the foyer. He truly does love it and although he has taken some pretty hard wipeouts, he always is smiling when he’s outside skiing down the path. It’s so fun to watch.

Here is a link to a short video of Henry that we took yesterday!
https://goo.gl/photos/PrpFpEWjmNTsrqnU6

Well, I do hope that my next blog is about baby’s arrival! I’m getting worried that he or she is just too comfy in there 🙂

Here are a few pictures from the past few weeks, as well as my girls weekend/baby shower in Kenora!