Our canoe is soon to overflow :)

Posted on September 9, 2015 by lifeonabramlake

This past week, during my last precious few days of summer vacation, Blake and I decided to take Henry out for our first family canoe trip. Although we have been camping with Henry before, we had yet to take Henry out on an overnight paddling excursion. We decided to just go for it!

We threw together our gear, planned a very conservative canoe route, packed Ada and Henry into the car and strapped the canoe on top. Away we went! 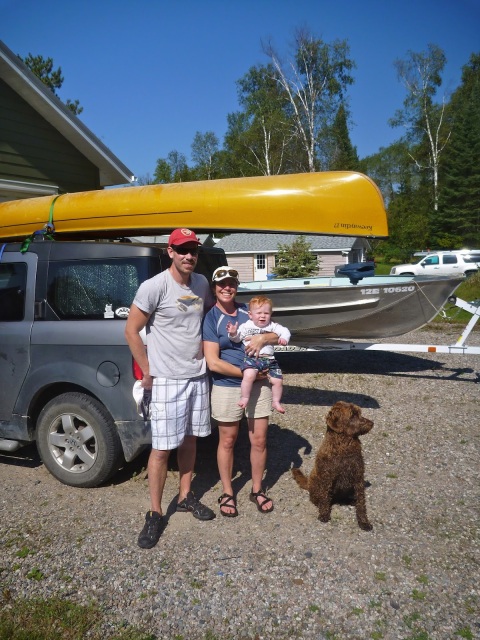 Thankfully, we had planned our little three-day trip on the sunniest, warmest days of September. It was an incredible 30degrees C everyday. We put in at a nearby provincial park and began our afternoon paddle. With Henry in the bow in front of me, things started out just great! He loved to hang over the edge and play with the water or attempt to ‘paddle’ with my paddle. After an hour of paddling, and portage, Henry started to get cranky. No problem, we thought. The site we had marked on the map, recommended by our friends was just around the corner. We pressed on despite Henry’s increasing protests. As I was beginning to run out of rice crackers and Cheerios to keep him happy, we discovered that the campsite that we were planning on staying at was really a tiny rocky point, with NO possible place to put up a tent. As the afternoon wore on, with the hot sun overhead and the wind picking up, we were in a bit of a pickle. Henry at this point, was desperate for a nap. We decided stop over at a small clearing beside another portage and hastily set up his little tent. He immediately fell asleep.

Unfortunately, it was a brief siesta and not even an hour later he was rocking his tent, anxious to be set free 🙂 We loaded the canoe back up and began a precarious quest to find a campsite. Blake and I have been in this situation many times before, and often we would paddle the shoreline until we found a suitable spot to pitch our tent. With Henry even more cranky than before, this strategy seemed a little bit like torture. As it was fairly windy, I had to paddle which meant that I couldn’t hold or really comfort Henry. As a result, he cried and wailed, initially standing up, clutching my t-shirt and then eventually, sobbing face down into the bottom of the canoe. It was so sad! 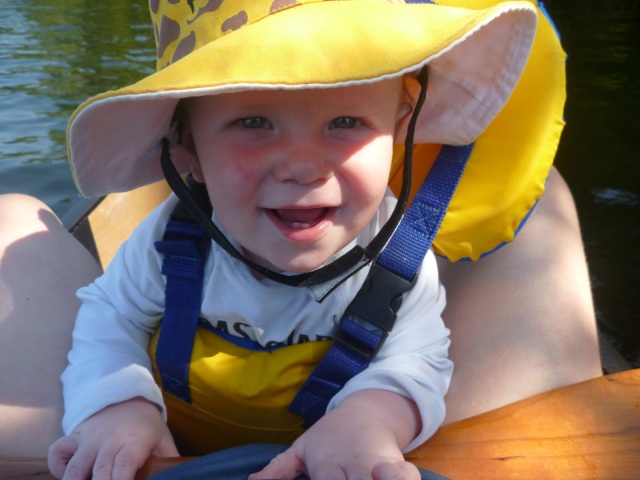 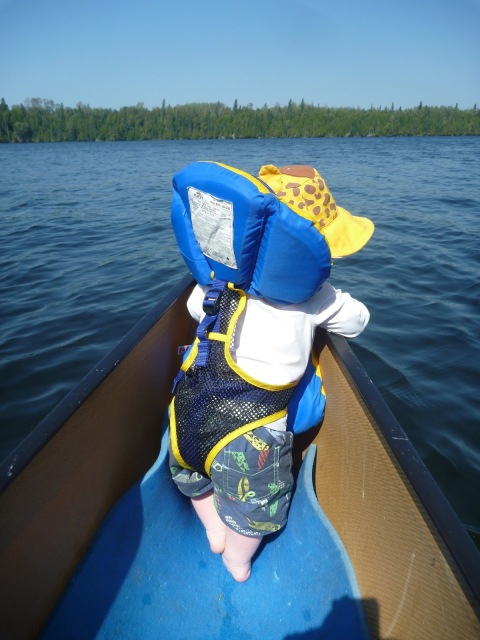 After about 40 minutes, we finally found a site. It wasn’t ideal, but at least there was room to set up the tent! We quickly made camp, while Blake hastily cooked up a small bass for Henry’s dinner. We fed him and put him promptly to bed. I’m not sure what time it was but I doubt that it was even 6pm! With Henry comfortably sleeping in his tent, and with Ada and Blake fishing nearby, I had a quiet moment to enjoy finally being back out in the woods. Whew what a day! 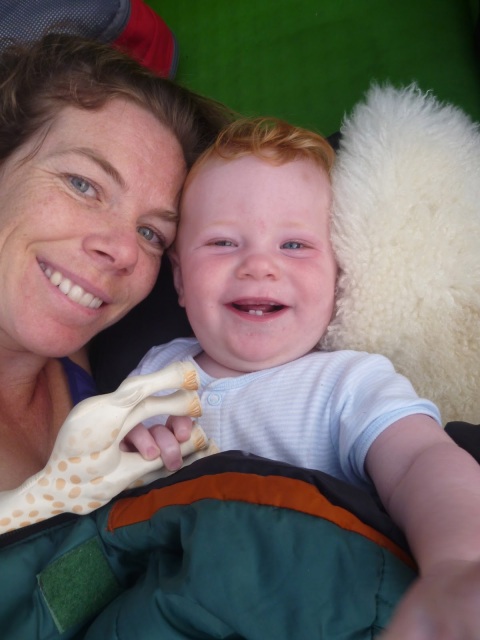 For dinner, Blake and I feasted on a curry made with fresh bass just as Henry awoke again! I guess he thought that his bedtime was just a nap. Oh well! After cleaning up our site for the night, we played in the tent for awhile and then as the sun dipped behind the pines, we all tucked in for the night – Henry, Blake, myself and Ada all squeezed into our little three-man tent 🙂

The next morning, we awoke to a beautiful sunny day. Henry crawled around the campsite and played in the barrel pack while Blake made breakfast and I took down our tent. Then, after a quick nap, we headed back onto the water, in a quest to find a better campsite. We ended up portaging back into the first lake and finding a lovely point with great swimming rocks and a shady tent area. I was relieved to get off the water and get Henry into the shade as it was so, so hot with not a cloud in the sky. We spent the afternoon playing in the water, fishing and just hanging out. Blake caught a few more bass which we all devoured. Despite their tiny size, they were pretty delicious! 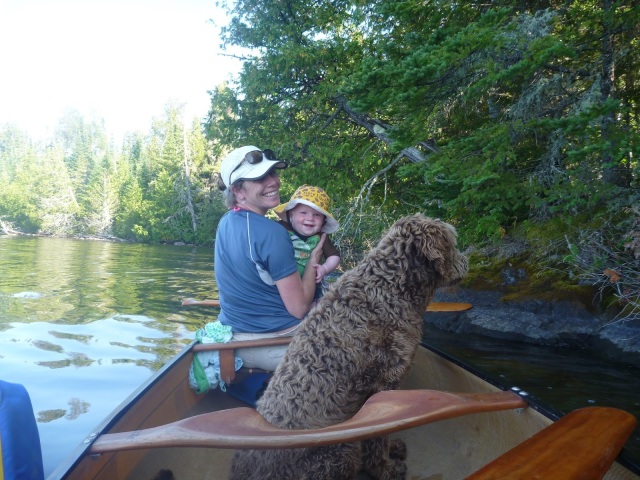 In the evening, after Henry was fast asleep, Blake and I were treated with a gorgeous sunset followed by a beautiful show of the northern lights. We’re so spoiled! We played cribbage and poker well into the night as Blake tidied off his supply of rum 🙂 As it was so warm, we left the fly off the tent and watched the incredible night sky of stars before drifting to sleep. 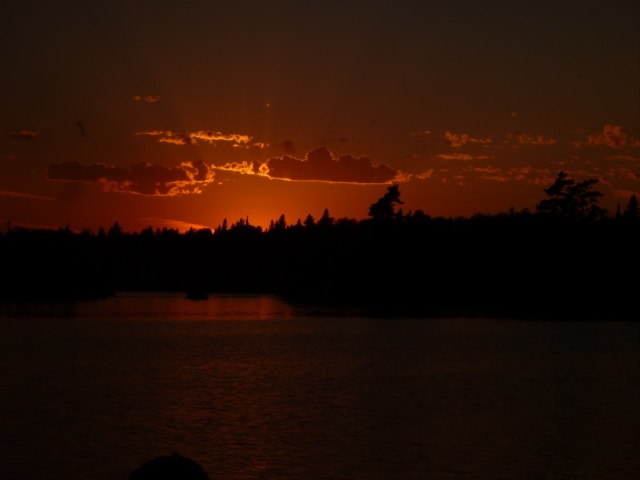 On the morning of our last day, the weather finally had turned a bit chilly. We had a leisurely breakfast, then packed up, paddling just a short distance back to the car. All in all, I think our first family canoe trip was a success! Next time, I’ll know to bring WAY more Cheerios and plan to do WAY less paddling 🙂

Finally, in other news, our canoe will soon be getting even more crowded as we will be welcoming a little sister or brother for Henry in the Spring! Blake and I are very excited and look forward to having twice the fun (and chaos) of two kids under two! If Kate Middleton can do, so can I 🙂

One Comment on “Our canoe is soon to overflow :)”