Wake Up Singing: Life Advice from a Toddler

As parents, our ego-centric nature leads us to believe that we are the ones teaching our children, instilling in them all sorts of life values. However, the other day it struck me that the opposite is true. Of course we teach Henry to say “please” and “thank you,” to brush his teeth and to be nice to his sister, but it is Henry who teaches us incredible life lessons.
As Henry inches closer to two years old, I have been steeling myself for the ‘terrible twos’, bracing myself for tantrums, the ‘bad’ behaviour and the impulsivity that stems from the immature frontal lobe. Of course, Henry has his bad days, but he is true joy to be around. As much as I loved him as a baby, I do think I have enjoyed him the most in this past year. I would have never expected him to have taught me so much.
Here is some life advice from Henry 🙂

Just brush it off and “hop on”.

Like any toddler, Henry has had his share of tumbles. Well, maybe even more tumbles than the average kid given his ‘extreme’ nature. Of course we comfort him when needed, but when Henry has had minor bumps and falls, we have tried not to overreact, letting him sort himself out. Usually, when he hits his head (which is often), he will rub it saying, ‘oh bonk!’ or when he face-plants into the sand, he jumps up and brushes off his hands without a tear. Last week, when I was away, he was out biking with Blake. Henry biked off the road and landed face-first into a ditch full of water. Without crying, he exclaimed, “Uh-oh water!” Then as Blake helped him up, he didn’t miss a beat. He got back onto his bike saying, “Hop on!” and away he went. I am often surprised by his resiliency and try to follow his example. In the face of adversity, we should all strive to get up and “hop-on”! 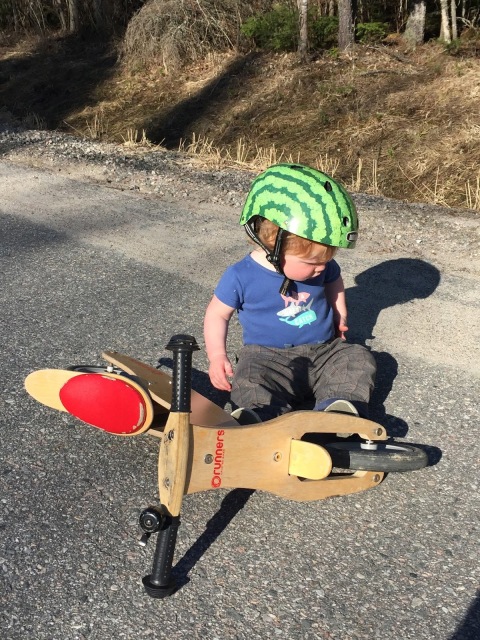 Get outside.
In our age of screen obsessed culture, it is easy to be caught staring at a phone or a laptop instead of getting outside and enjoying the beauty around us. Henry’s limited screen time has been watching videos of skiing, biking and Blue Jays games when he snuggles up beside Blake on the couch. He yells, “Go Jays go!” or “play ball!” and imitates Blake’s appreciation or disappointment of the game exclaiming, “nice!” or “oh nuts!”. Aside from this, Henry is not interested at all at watching a screen. He LIVES to be outside. Like most kids, during our very chilly winter, he didn’t seem to be ever bothered by the -30 degree cold on our afternoon walks. Then, once the weather turned warm and Henry began to explore about on his own, he would run regularly to the door and yell, “Die, die, die!” –  his way of subtly letting us know that he was desperate to get outside. When he discovered his passion for biking, there would be epic tantrums when we tried to get him back into the house for dinner. One spring day, it was miserably cold and pouring rain. Neither Blake nor I were very keen to accommodate Henry’s persistent requests to get outside to go biking, but we eventually gave in. How could we say ‘no’ to a kid asking to play outside?! So out we went in our rain gear and Henry happily biked for almost 3 hours in the dreary rain. I just hope he never loses his passion for the outdoors and that he always reminds us of our shared love for being active. 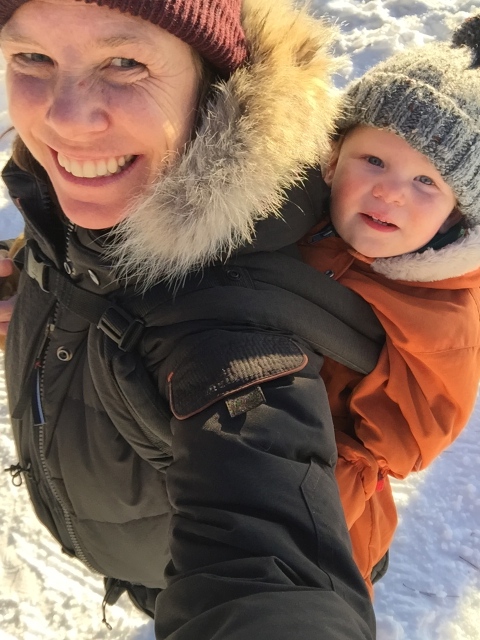 Eat your fruit and veggies.
Seriously, what child asks for raw tomatoes for his morning snack? One of Henry’s first words was ‘chickpea’ and the kid goes crazy for lentils. He has eaten frozen, local blueberries at every single meal for the past year and still goes nuts, yelling, “MORE BLUEBERRIES PLEASE!!”.

Don’t be afraid to pursue your passions.
I really don’t know where Henry gets it, but when he is into something, he is really into it. When Henry learned how to ski at the ripe old age of 14 months, he would wake up every day, run to the door and try to put on his ski boots, excitedly yelling, “SKIIIIIIIIIIIIIIIIIIIIIING!!!’ No matter how hard he tumbled or how cold the temperature, Henry would get outside and ski. Now that the snow has melted, he has taken up biking as his new passion and is equally enthusiastic. There have been many meltdowns at the front entrance, as Henry, still in his jammies at 7 a.m., has his helmet on and is pounding at the door trying to go outside to bike! As the days seem busier and busier, I often reflect that I rarely devote time to my passions – paddling, reading, being active outdoors… Of course, when you have a toddler and a baby, it’s a small miracle if you even get to shower, but now as Alice is starting to sleep more reliably in the evenings, I hope that I can get back to doing the things that I love too. 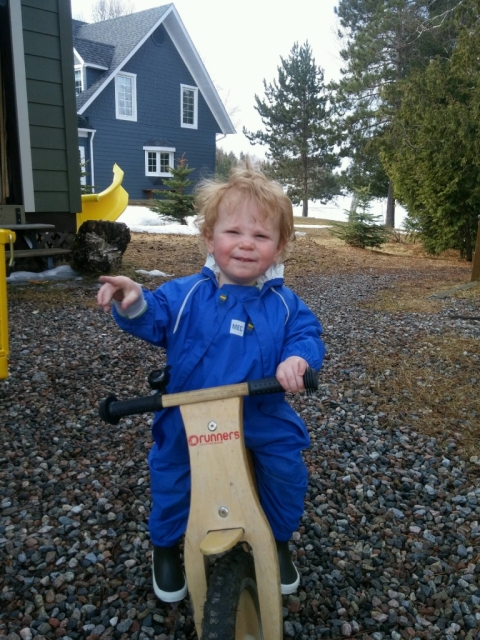 Be captured by the small things.
If you have ever spent any time outdoors with a toddler, you will understand how captivated they are by the tiniest details of their surroundings. I’m sure this stage won’t last forever, but one of my favourite things to do with Henry is to follow him around our yard as he explores. It always reminds me to take time to appreciate the beauty that surrounds us and to slow down and notice the small things. 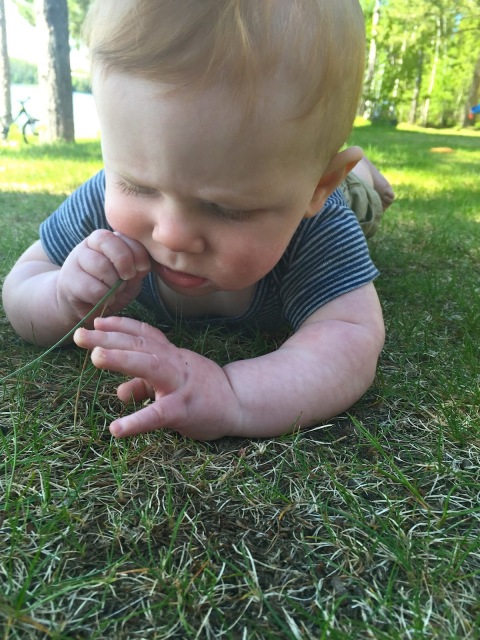 Finally, there is nothing that I love more than to listen to Henry when he wakes up in the morning. Unlike us adults, children seem their happiest as soon as they awake and Henry is my favourite alarm clock. From the moment he opens his eyes, he begins a stream of sweet songs and stories. Usually it goes something like this:
“Eeeee-iiiiii-eeeee-iiii-ooooooooooo! Dad-Dad! Ada! Mama! Dad-dad? Iiiiiiiii-oooooo! Happy birthday! Ada! Aaaaaaada! Bike? Biking? Hunter? Nariah? Dad-Dad! Daaaaaaad-Daaaaaad!!!!”
This carries on until we come into his room where he greets us with a huge grin, while his little hands grip the edge of his crib and he jumps up and down, ready to seize the day!
If only we could all wake up with such joy 🙂

← Sleep Training Round Two
The Paradox of Parenting →