Posted on September 7, 2015 by lifeonabramlake

What a busy summer it has been! I can’t believe that it’s the September long weekend already. It has flown by and yet again, we have truly been spoiled with sunny days of swimming and playing on the beach. 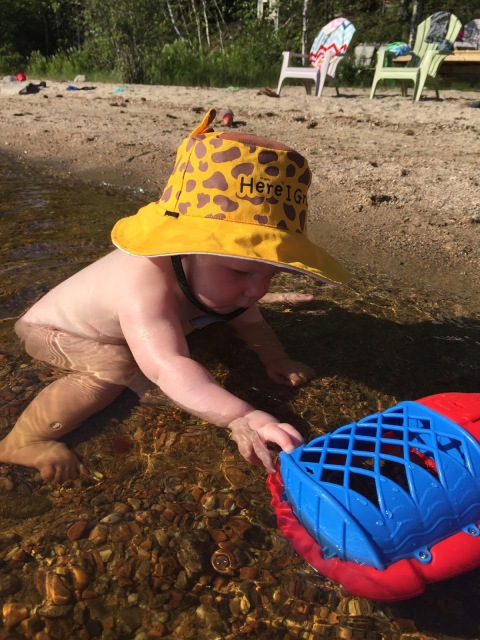 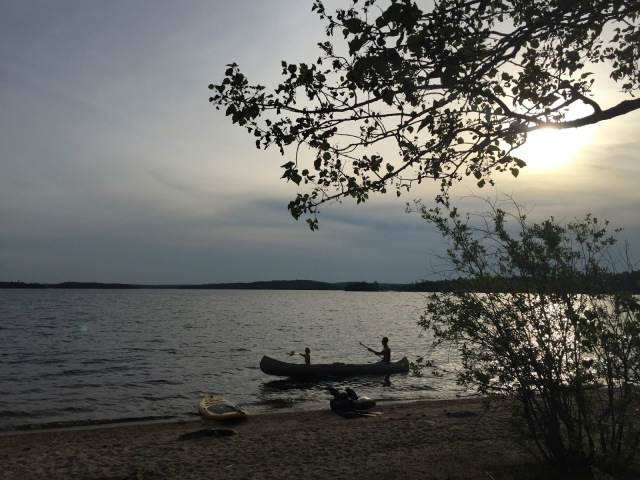 Henry has changed so much over the past three months. Since the end of June, he has been much more mobile and is getting increasingly steadier on his feet everyday. I’m definitely not encouraging early walking, but I think it will be happening quite soon! 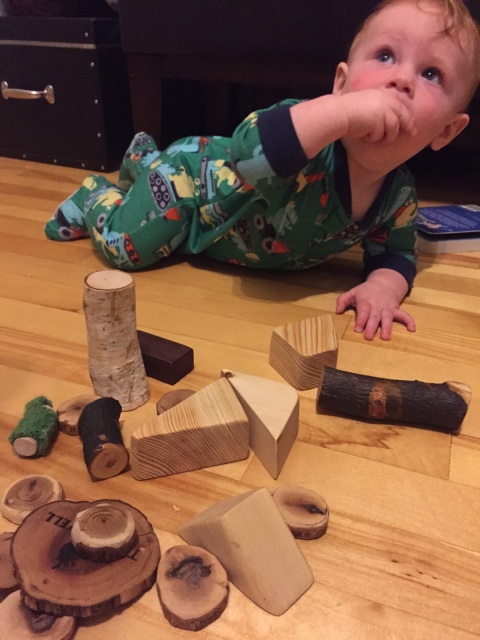 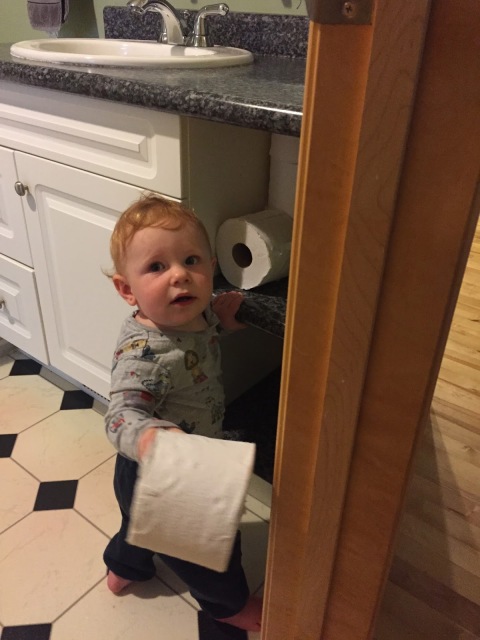 Our daily routine hasn’t changed too much, but with trips and social events, the ‘schedule’ has been shifted here and there to accommodate these special occasions. Henry has been a trooper and is always a solid sleeper no matter what is going on. We are very lucky in that department.

These days, Henry will wake up anytime between 6:30 and 7am. I always get up with him as it is our special time together (often before I have to go to work). I usually bring him into bed with me while Blake tries to keep snoozing while I feed him his bottle. These 10minutes of his day are the ONLY time where he isn’t moving! After he’s finished his bottle, he’s immediately on the go. He loves to climb up the headboard to turn the light switch on and off over our heads or crawl all over Blake or I, poking us in the nose, eyes, pulling our hair, etc. etc. While I love how busy he is, sometimes I really wish he would lay quietly and snuggle!

Then, wardrobe change #1 (usually of MANY throughout the day) and off to breakfast. I do my best to eat my own breakfast with Henry but I feel like most of the time, I’m grazing while I try to get some food into Henry. Most days, he’s a pretty good eater and will feed himself scrambled egg, PB on toast, Cheerios, fruit or oatmeal. Ada, is constantly right underneath his highchair. This symbiotic relationship has developed over the past few months of solid foods for Henry. At first, Ada would clean up whatever Henry dropped while trying to hit his mouth, but now, Henry has figured out that it is great fun to actually feed Ada directly and will endlessly hand over whatever is on his tray unless I’m watching closely. What two little monkeys!

After breakfast, we play a bit outside or go for a run if I don’t have to jet off to work. Then, he’ll go down for a nap around 9ish and will snooze until 11am. During these precious hours, I try to do as many of my chores as possible. Despite the fact that he has become a consistent napper, I always find that no matter what, his naps never seem long enough for me to get anything done! 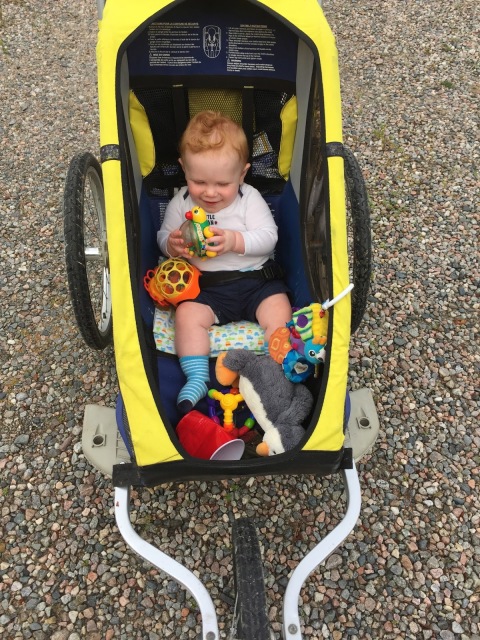 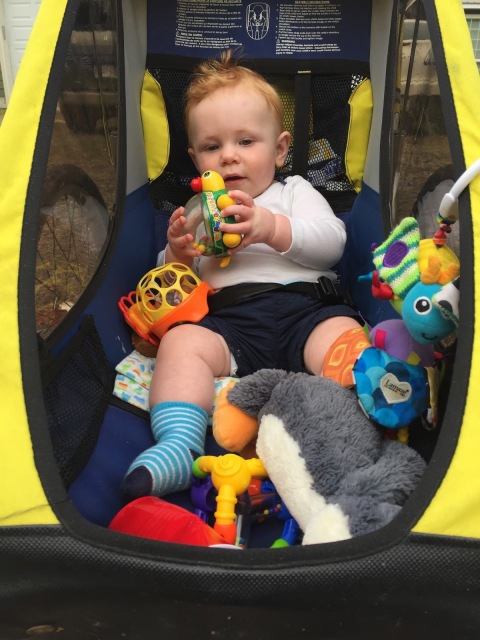 Mid-day, is usually spent on an outing to town, playing outside at the beach or just hanging out in the yard. Brooks and Hunter (the boys next door) love playing with Henry and often will plunk him down on one of their toys (Thomas the train, the batmobile, etc) and will drive him around the yard. It’s a lot of fun to watch them play all together. Henry is certainly lucky to have those boys to play with him.

Blake and I have also been taking Henry out on the sailboat which has been great for all of us. I usually watch Henry while Blake sails us around. What great service! We have been out on many sailing adventures on Abram Lake this summer, whether it be a cruise to one of the islands for a picnic or just a tour up the lake to fly the spinnaker home. 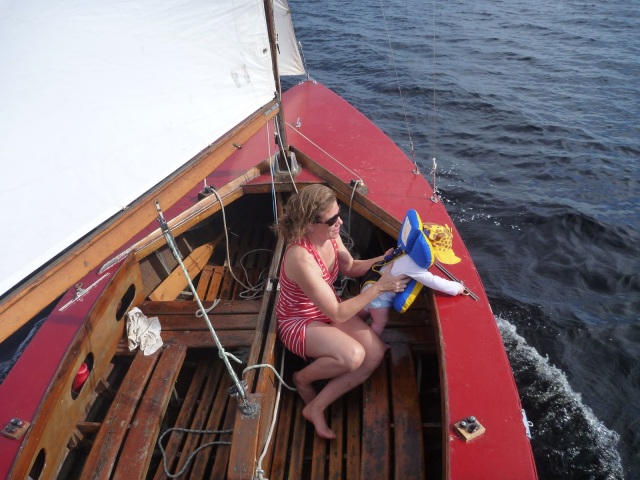 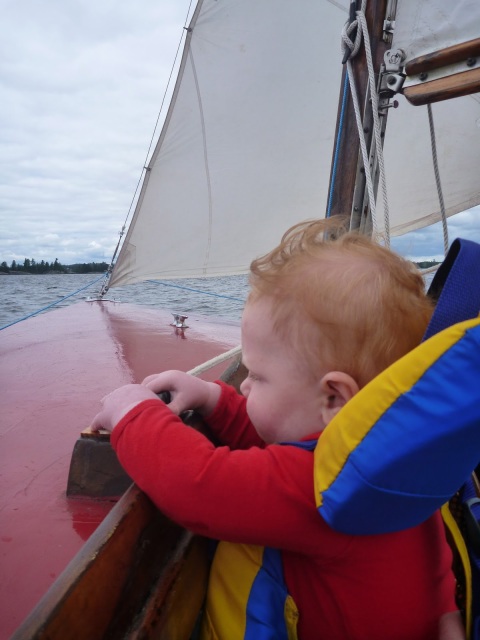 It’s sometimes tricky, but we try to get Henry down for his second nap by 2ish and he will have a solid snooze until 4pm. Then, it’s go time again! Back to the beach, out in the canoe, playing on the paddle boards, etc. There is always something to do! Then it’s dinnertime at 5:30pm followed by a very necessary bath. I then feed Henry his bottle and read him a book, then off to bed he goes at 6:30pm. We have been really lucky as well that Henry has never needed either of us to put himself to sleep, so we have really started to take advantage of having babysitters come in the evenings to put him down, giving Blake and I a chance to have some social time to ourselves which has definitely been a new development 🙂 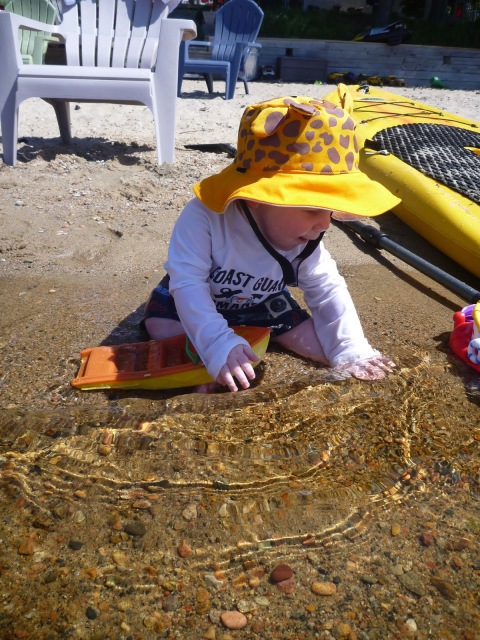 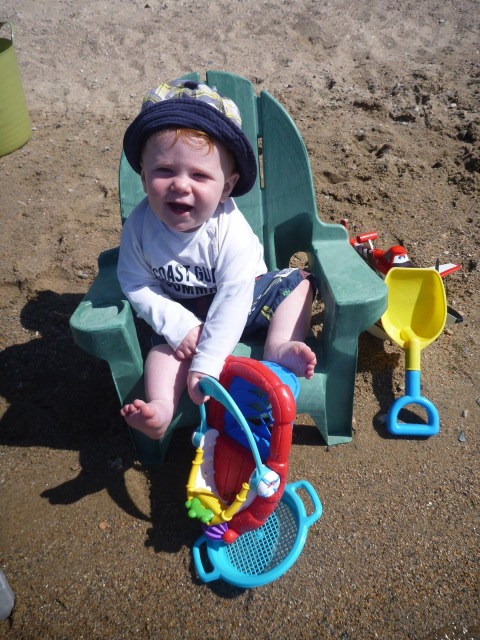 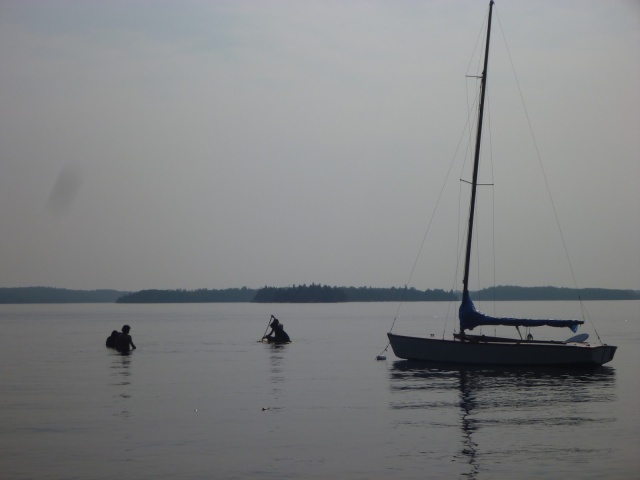 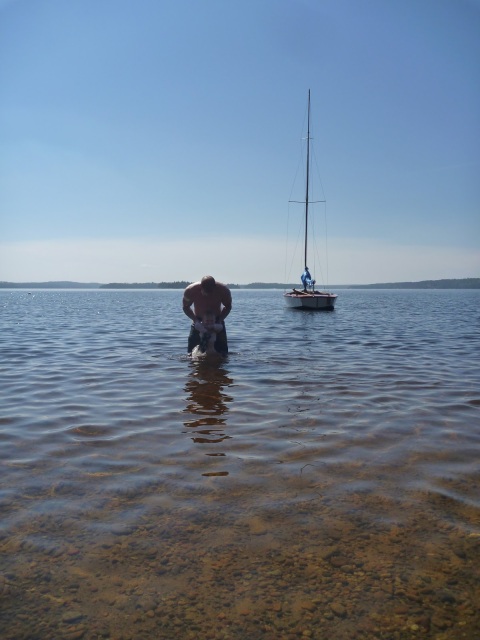 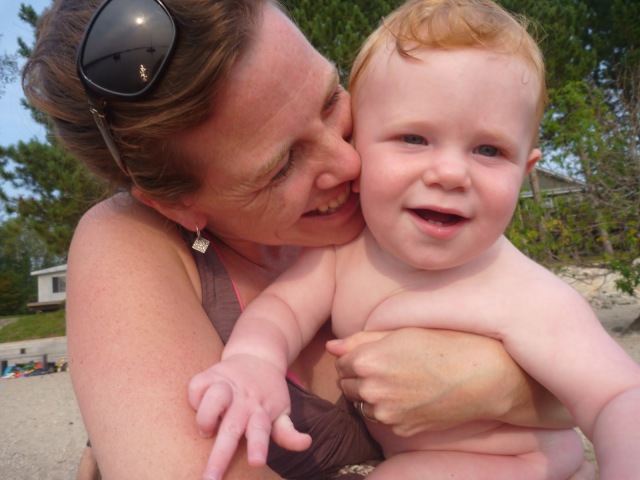 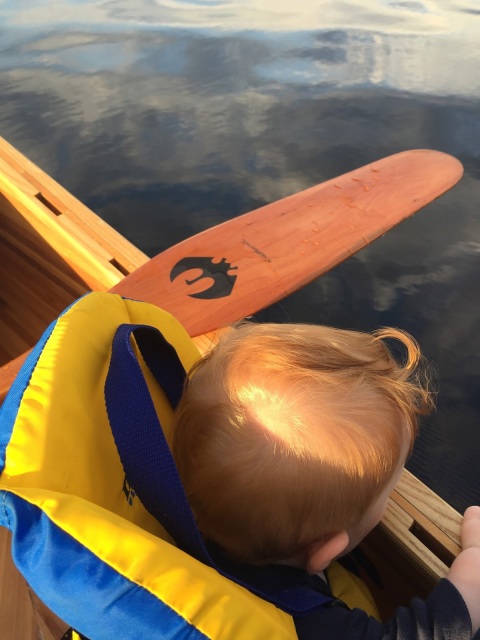 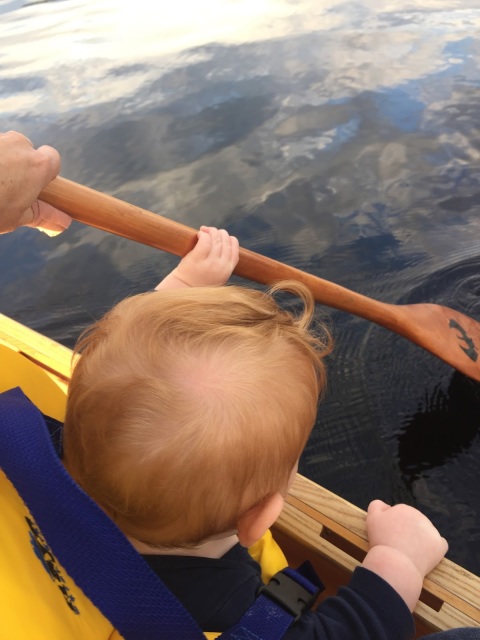 Over the last two weeks, I have had a blissful break from work. Unfortunately, my maternal grandfather passed away unexpectedly. Henry and I ended up travelling South for the funeral held in St Catharines. It was a sad occasion, but it was lovely to see my family and for Henry to have a visit with everyone. We also spent two days with my sister, Leah and her two kids, Rosie and Luc in Guelph. I haven’t been able to spend much time with them recently so it was a great (but short) catch-up! 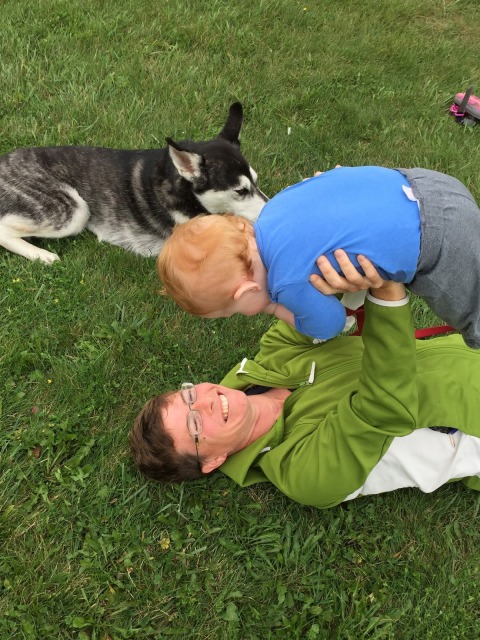 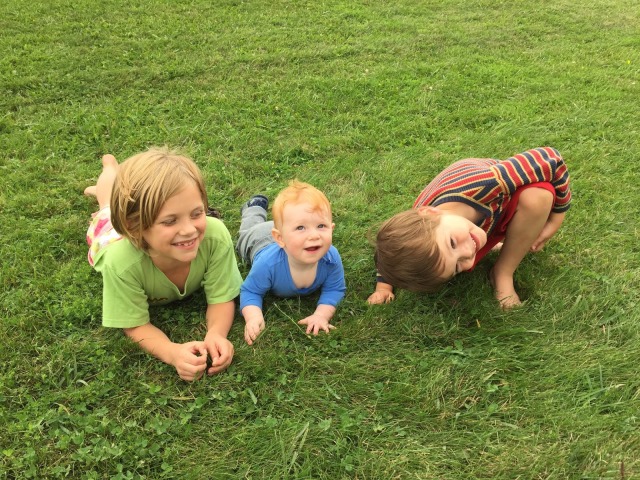 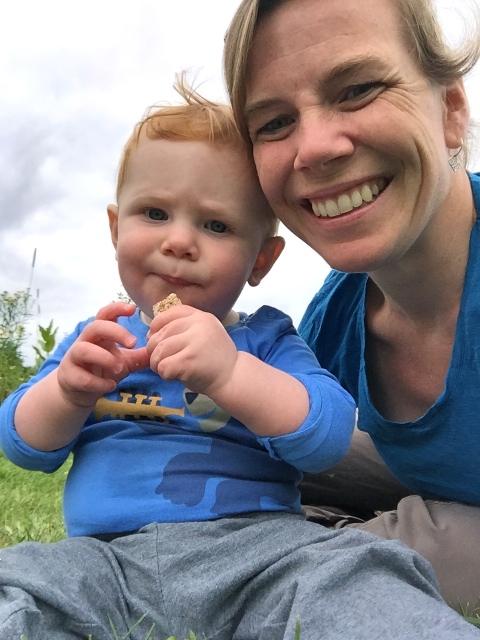 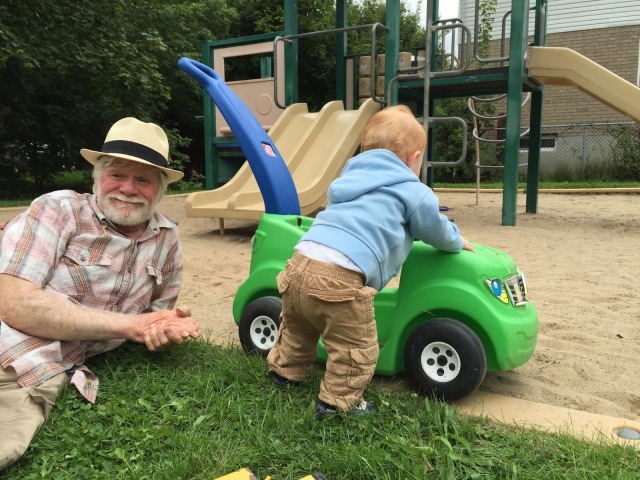 In general, travelling with Henry hasn’t been too arduous. I have now come to expect that he just will not sleep on flights any more! This makes things slightly challenging as it is hard to entertain him on the plane. On our flight back from Toronto to Thunder Bay, he spent the entire time climbing up all over me in attempt to get to the highest vantage point possible! Even the flight attendant commented that he had never seen a baby as busy as Henry! Geez!

Today is my last day of vacation 😦 I’m back to work full-time now – a transition that I am not looking forward to. In reality though, I ahve been technically working full-time in terms of the number of days per month that I have put in at the hospital, but now the health authority that I work for wants me to do full weeks where essentially I will be out of the house from 8am until 6pm plus call shifts throughout the week. Ugh. I’m definitely not ready for this. Especially since Henry has recently begun to go through a phase where he only wants to be held by me in particular. I’m a bit worried how the next few months will go!

Anyway, we’ll figure out a way to make things work, as we usually do!

← A quiet moment
A Happy Life →