Hank & Walt do Revelstoke, Celia goes under the Knife and How to Sleep Train a Baby

Posted on February 2, 2015 by lifeonabramlake

Like the heavy snow slipping of the weighted cedar branches, the days of January have slid by. As I sit in our living room, the sun brightly shining over Mount Begbie, backed by a sky of brilliant blue, I can’t believe how fast our time in B.C. is going by.

Our first few weeks in Revelstoke have been nothing short of amazing. Although the ski conditions have been less than ideal for Blake, Henry, Ada and I have definitely made the best of my mobility before I was scheduled to go under the knife for knee surgery. Hikes up Mount Mackenzie, snowshoeing in the quiet woods on Mount Revelstoke and sweat-drenching work-outs on the nordic ski trails of Mount Macpherson have filled our days, interspersed with trips to the hot tub, to the local community pool and to the day spa at the base of the Revelstoke Mountain Resort. 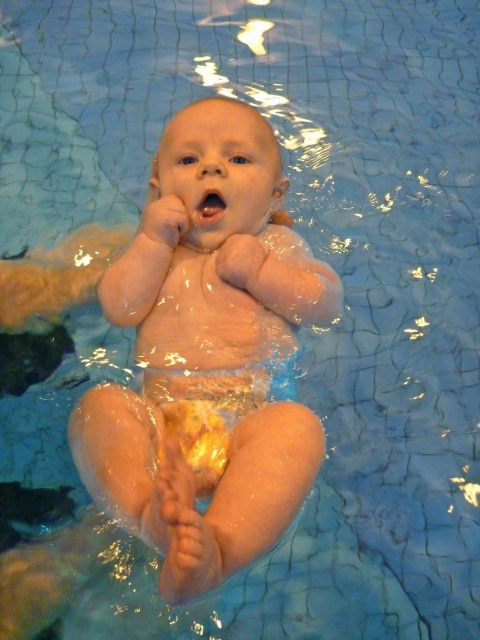 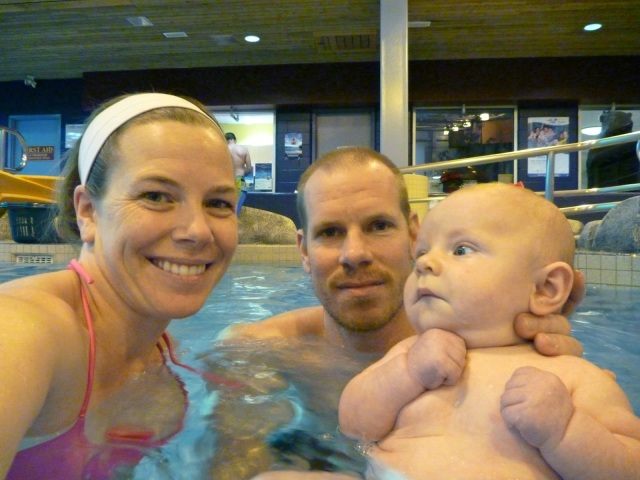 When we first decided to come out to Revelstoke, Blake made up a Google Calendar and sent it out to our friends asking them to book themselves into our guest bedroom. The days quickly filled up and the first of our visitors began mid-January with the arrival of our friends Courtney, Matt and their dog, George. At the same time, we were reunited with a number of the ‘R2s’, a group of fun-loving physicians and their partners who did their residency training in Kelowna a year ahead of myself. Our social calendar began to get busy with dinners out at the Village Idiot (the local pub), at our condo and at friends’ homes. Although I was happy to get out and visit, it was also a challenge to balance our social lives with Henry’s sleep schedule. Fortunately, he was extremely patient with us and was happy to go out and party while sleeping or snuggling in the Ergo carrier.

We also have been continuing to take advantage of our ‘ownership’ status here at the Sutton Place Hotel. Since we are staying in Blake’s friend’s condo, we are considered owners at the hotel which allows us perks beyond the nightly complimentary wine and cheese in the lobby. With his ‘owner card’, Blake is allowed to bypass the gondola line on powder days which has been a great plus for him. Last week, the hotel held an owner appreciation day which was a lot of fun for Matt, Courtney, Blake and I. It started out with a ride up to the mid-station lodge via the gondola in the early morning of a powder day for a delicious buffet breakfast. As we stuffed ourselves with gourmet eggs, pastries and coffee, we watched the darkness of the morning slowly make way to a metallic grey which eerily illuminated the snow-covered trees clinging to the backs of the jagged giants that surrounded us. It was truly beautiful. As the boys pushed on to the peak of the mountain for their day of powder turns, Courtney, Henry and I made our way back down to the base, only to see that the gondola line that had began to form at 6:30am was now snaking its way all the way to the parking lot! Unfortunately, towards mid-morning, the snow conditions had turned out to be quite poor and so Blake and Matt joined us for a complimentary lunch at the hotel, followed by an apres-ski wine and cheese – all included in the perks of ‘ownership’! 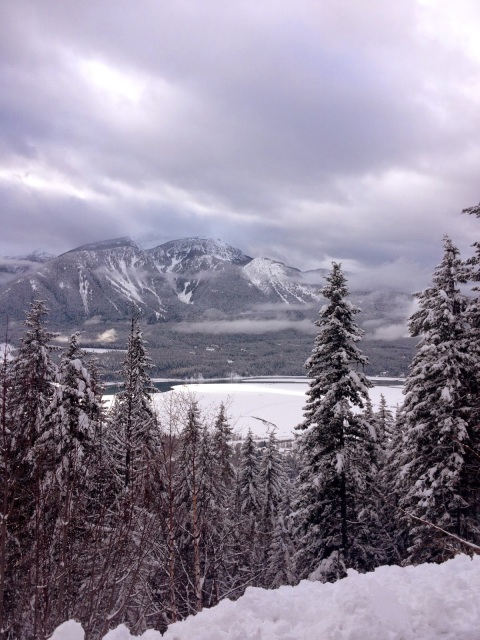 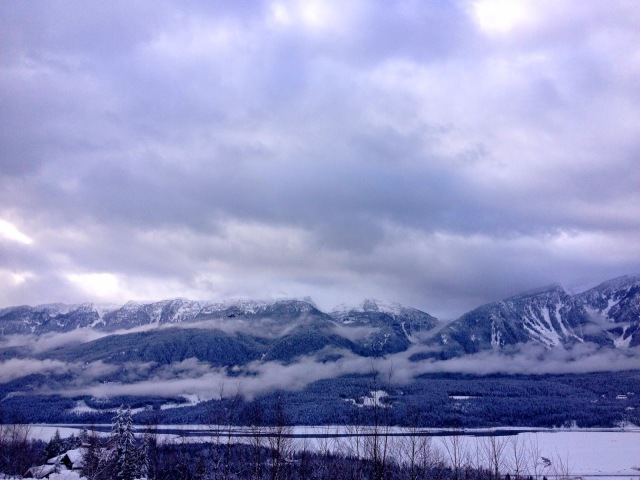 Although life has been pretty idyllic, our last few weeks haven’t been without challenges, mostly in the sleep department. Henry has never been a terrible sleeper – the majority of the time he has been waking up every 4 hours to nurse since about 2 weeks old, but over the past few weeks, he had started to become more and more dependent on having a soother and being rocked to sleep than ever before. He continued to wake for feeds, but he had also started waking up if his soother had fallen out of his mouth or if he had busted out of his swaddle. Worse still, it had come to the point where I would have to get out of bed multiple times to help him get back to sleep by rocking him. This made for long nights just as we had thought we were making progress by moving him into his own room.

Just as things had started to become a bit challenging, we were expecting a visit with our dear friends Chris and Kelly, a couple we had met on Haida Gwaii two summers previous. They had a 5-month old named Walter and had recently started to sleep train him with seriously amazing results (Walter had been waking every 2 hours for a number of weeks and his first night of ‘sleep training’ led to a 10.5hr sleep!!). Since we wanted to support Chris and Kelly in their sleep schedule while they visited for a week, we decided that we would give it a go with Henry! Maybe, just maybe, Walter would teach Henry a thing or two!

Before I became a Mom, I had zero knowledge about the many infant sleep philosophies and ‘programs’ that existed. To summarize, it is incredibly confusing territory with methods from ‘Attachment Parenting’ to ‘Ferberizing’, to ‘Pick-Up, Put-Down’ and ‘Gradual Extinction’. Browse the Internet and you will come across pages and pages of advice and theories on how to get your squawking baby to sleep through the night.

To be clear, I really had no real qualms about feeding Henry in the night. He had become quite efficient at nursing and it was MUCH quicker to feed him and put him back to sleep (usually 20 min) in the night than it had been weeks earlier (when it used to take 60-80min!). What I had started to worry about was heading back to work. I had received my work schedule for March and the reality of being a working Mom had hit me. We had to try to encourage Henry to learn to sleep on his own with the hope that I would only need to get up to feed him and not to rock him or struggle with his soother and swaddle.

So, the sleep training began.

On night #1, Chris and Kelly arrived with Walter. We were so excited to see them! After dinner, Walter went down for bed in a record 5 minutes, while Henry’s usual night-time routine took at least 25-30min. Kelly and Chris schooled us in the plan of attack for the night – when Henry woke up, we were to wait 10 minutes, then go into the room and rub his belly while ‘shushing’ him back to sleep. We were to do this every time he woke up with the exception at the 4-hour marks which were usually his nursing times. Oh, and we took away the soother and swaddle – our sleep-time staples!

Fortified with red wine, room-service desserts and industrial ear muffs, the night began. Henry cried for 35 minutes the first time while Blake, Kelly and Chris traded off doing the ‘shushing’ in ten-minute intervals. I, on the other hand, wore the ear muffs, devoured the red wine and sobbed into my chocolate mouse. This continued through the night, with Henry waking four times, but encouragingly, crying less each time.

Night #2 began with more wine and dark chocolate truffles. The crying ensued for 30 minutes, but this time, Henry only awoke once at 1am to nurse, sleeping from 8:30pm to 7:30am! Maybe, just maybe it was working!

With our new-found confidence and MUCH encouragement and cheerleading from Chris and Kelly, on night #3, Blake and I put Henry down to sleep (20 min of crying), then LEFT THE BUILDING FOR A NIGHT OUT! Chris and Kelly generously had offered to babysit and so Blake and I fully took advantage of the offer and had the most delicious dinner at the Woolsely Cafe in Revy. It was our first time away from Henry, and did it ever feel great to get out! Miraculously, he slept from 7:00pm until 8:20am, waking only once to nurse in the night. It was amazing.

We continued on this path, and on night #6, Henry slept from 8:30pm until 7:00am without a PEEP! We also had gradually stopped ‘shushing and patting’ until by night #7, we could change Henry, give him a massage, have a little cuddle and song, put him in his bassinet sans swaddle or soother and walk away. Amazing! I just couldn’t believe how quickly he had learnt to soothe himself! It had definitely been extremely difficult to hear him cry that first night, but wow, what a quick little learner.

Unfortunately, our visit with Chris, Kelly and Walter had to come to an end and as they returned back to Alberta, we packed the car to travel to Banff for my surgery.

After three years of knee problems and two surgeries, I was heading into yet another ACL reconstruction, this time with renowned orthopedic surgeon, Dr. Greg Butchko at the Banff Sports Medicine Clinic. I definitely was apprehensive going in, not just because of the surgery, but I was also leaving Blake and Henry for an entire day. I had never been apart from Henry for more than 2 hours before this so I was nervous! With a cooler filled of breastmilk, the boys hunkered down at the Banff Park Lodge while I walked next door to the Banff Mineral Springs Hospital. By late afternoon, I was heading out the door on crutches, but in good spirits. The surgery had gone well and I (fingers crossed) would never be facing another revision. We spent the next day in Banff before heading home to Revelstoke so that I could recuperate in front of the fire with mountains in view.

Aside from the progress in the sleep department, Henry keeps growing and changing in so many ways. He laughed for the first time a few days ago – a sound that any parent will do anything to hear again and again. Henry is also demonstrating feats of strength. He isn’t a big baby, but man is he ever strong! He loves to stand essentially on his own and recently, Blake will hold him up and he will support his own weight, hanging off of Blake’s thumbs. Henry has also ‘discovered’ his feet and will spend much time staring at his toes, so much so that if he is sitting on the couch doing so, he will eventually end up in a face plant in his eagerness to get closer to these strange creatures 🙂 Language-wise, he continues to coo and ‘sing’, especially while nursing which is adorable and endlessly entertaining. 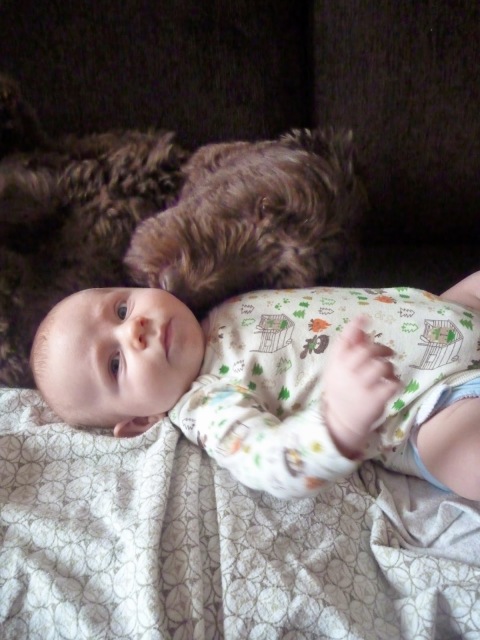 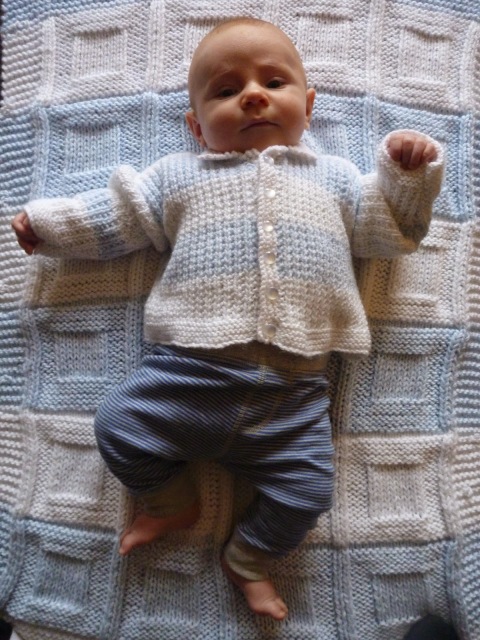 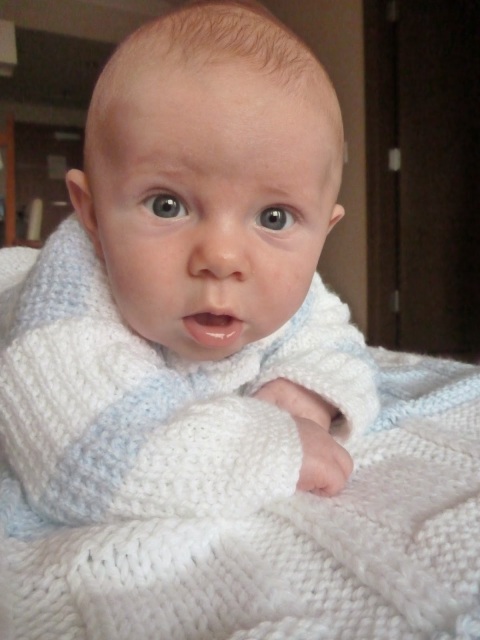 Next up on our social agenda is a week-long visit from our Sioux Lookout friends Cat & Megan! We can’t wait to see them and I will definitely appreciate more hands to help with Henry. Hopefully in a few weeks I will be back on my feet and enjoying the mild B.C. weather!