From the Arctic to the woods of Northern Ontario

Posted on November 15, 2014 by lifeonabramlake

After a blissful three weeks off of work, I am finally catching up on all of the things that I have been neglecting during the past months of finishing my residency in family medicine, studying and writing my licensing exams, moving across the country to start my first ‘real’ job as a family physician and starting this new chapter  in my life as a parent with Blake.

When I was pregnant, people would constantly ask me, ‘Are you ready?’ This seemed like an impossible question for many reasons. How can one ever be possibly ‘ready’ to become a parent for the first time? I also struggled with this question because, at the time, I was overwhelmed with learning the ropes of my new job and practicing medicine independently. I had not had a moment to even consider what possible change was coming my way as my belly grew, and grew.
Now, as life has finally slowed down, I have truly had time to reflect on my pregnancy and our journey over the past months.
Standing in the closet-sized nursing station bathroom, I felt my stomach flip-flop as the blue line faintly appeared in the window of the hospital-grade pregnancy test. It is so hard to capture the many emotions and thoughts that were released in that exact instant. They flooded my brain as I stared hard at that small piece of plastic that had just changed everything.
Only months from the end of my residency training, I had been working in Inuvik, NWT, and that chilly March day, I had been running a clinic in an out-post nursing station in the small Inuit community of McPherson. Perched high on the riverbank beside the stunning Peel River, McPherson is home to about 800 Gwich’inn people. I had spent the past few days seeing prenatal patients, children, Elders dressed in traditional mukluks and men and women who presented with a litany of issues indicative of the socioeconomic challenges faced by Indigenous people living in remote communities.  The clinic that day had been particularly busy, and after a delicious meal and a few glasses of wine shared with the clinic nurses, I had returned to my office to catch up on my charts. 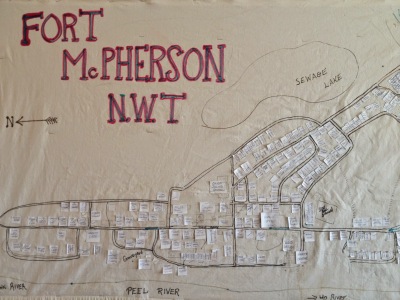 The clinic was silent and dark. I had been listening to the dogs barking outside and the footsteps of the nurses living in the quarters above, when I finally reached the end of my mountain of paper charts. Feeling exhausted, I had glanced at the clock – 11pm. I had been at the clinic since 8am and was desperate for a breath of fresh air. As I piled my charts on to the cart for the charge nurse to process in the morning, I brushed aside a handful of pregnancy tests that had been unused that afternoon. For whatever reason, I found myself reaching for one of the foil wrappers. Blake and I hadn’t been trying to get pregnant, and we were certainly not planning a family at this point in our lives but nevertheless, in that moment, I suddenly felt compelled to find out if I were pregnant.
Days, and more than six positive pregnancy tests later, I stared at Blake’s face through my computer screen. While I had been logging hours in the clinic and the ER in Inuvik, Blake had been clocking his hours on the ski hill. Splitting his time between Revelstoke and Rossland, BC and occasionally living out of the back of our Honda Element, Blake had been spending the winter in pursuit of his constant quest for fresh tracks and untouched powder. Both Blake and our dog Ada had physically taken on the physical stereotype of ski-bum with their long hair and growing beards.
Without any preamble, I blurted out that I was pregnant which I immediately chased with a huge smile and a laugh, followed by a flurry of tears. Blake, on the other hand, stared shockingly at me, his mouth slack and hanging open. “But we can’t have a baby – you live in the North Pole and I live out of a car!”, was his response.
The weeks went on as I completed my four-month rotation in the Arctic. My mind, although crammed with medical knowledge as I studied for my licensing exam, constantly thought of this little life inside me. I started to worry about how my endless ER shifts fuelled by granola bars and the occasional cafeteria sandwich would affect my ability to carry this pregnancy. I agonized over whether my baby would grow up to be an overly anxious child after being constantly exposed to spikes in my cortisol levels and racing heart rate every time my pager went off or I was called to the trauma bay in the ER.
I plodded through night shifts and long days studying for my licensing exam, and in the Spring, I had completed my first trimester without mishap and had made it through a gruelling 4 days of exams in for my CCFP and LMCC exams. I breathed a sigh of relief.
The next few months sped by as I finished residency and attended my third (and last!) graduation ceremony at 22 weeks pregnant. Blake and I then packed our trailer and drove across the country, from Kelowna, BC to unload at our new house in Sioux Lookout, ON. After a 4-day canoe trip in Quetico at 6 months pregnant, I started my new job at the First Nations Health Authority in Sioux Lookout.
After many tearful days (and nights!), I slowly gained confidence working as an independent physician. It was a huge, terrifying leap and left little time for me to contemplate my growing belly. While friends who were also pregnant decorated their nurseries and picked out baby names, I worked full-time, anxious to build up my experience and to save up for my maternity leave.
A terrible prenatal patient, I squeezed in visits with my colleagues at the prenatal clinic in which I also worked. Often I was scolded for doing my own vitals and writing on my own prenatal record, but I found the experience being a patient quite bizarre. I just felt as if my prenatal visits were an inconvenience to my colleagues as I was healthy and my pregnancy had been straight forward. In any case, they did certainly give me a better perspective on the demands that we as physicians make on patients. I no longer chastise any pregnant woman for taking weeks to get her blood work done!
In the end, I can’t believe how fortunate I was throughout my pregnancy. I continued to do everything that I did previously and didn’t have any complications or problems. My body adjusted slowly and I am so thankful that it enabled me to do as much as I did throughout my entire pregnancy.
Now as I nurse Henry and look at his sweet face, I often wonder what kind of a person he will grow up to be. I think of all of the stories he heard while I was pregnant – the worries, the tragedies, the challenges, the concerns and the victories of patients’ from Inuvik, Tuktoyaktuk, Aklavik, Kelowna, Sioux Lookout, Nibinamik, Sachigo Lake and Sandy Lake. I hope that these words will stay with him in some way and will help him to become an empathetic, caring human being.

← Sunrises, sunsets and northern lights
On the move →