Summer is officially here! For you in Southern Ontario, I’m sure you’ve been enjoying 30+degree weather for some time. For us, however, our spring is late and usually it doesn’t really warm up until July. Even today (now end of June), the kids are still needing their rain suits, fleece jackets and boots up here!
Anyway, here are a few picture updates from the Spring (April & May) on Abram Lake.

Since the days have warmed up, we have spent all of our spare time outside. It’s so much easier to entertain the kids just in our own back yard. We spend endless hours biking, playing on the beach, gardening and just puttering around the yard. Thankfully, we have the best neighbours so the kids always have playmates to keep them occupied!

Alice has been changing so much over the past few months. She’s very independent and much like Henry, likes to do things on her own. For example, she will refuse to eat unless you let her fend for herself with her fork. She loves to be on the go and, like Henry, hardly ever sits still. Just like Henry at this age, she will not cuddle or sit very long for a story. Over the past month or so, she has picked up a number of ‘words’, like ‘ball’, ‘Baba’ (Ada), ‘Da-Da’ (Dad), ‘bup’ (boat), etc. She still hasn’t figured out who I am, but I’m trying not to take that personally 🙂 She also will identify her nose, toes, eyes, belly button, etc.

Since Alice is still working out her language skills, her communication is mostly in the intonation of her noises accompanied with LOTS of gestures. When she wants to do something, she will pat her belly and point at whatever she wants. Or she has specific gestures for different things, like raising her right arm up in the air for ‘airplane’ whenever a floatplane roars over the house. It’s really interesting watching her develop. It’s the best part of being a parent.

Her day, like Henry’s starts at 7am when she wakes. She’s happy to chat and call out for Ada until I come and get her. For breakfast, we let Blake snooze while Henry, Alice and I eat our oatmeal, PB on toast, eggs and fruit. She ADORES blueberries (like Henry) and will go crazy when you open the freezer for them!

I’m usually out the door by 8:30am with Henry (to take him to daycare). During the day, she spends her time with Blake. They go for boat-rides, hang out in the yard or garage, putter around the house or do errands in town. She also still naps twice a day from 9-11am and from 2:30-4pm usually. I tried to cut her back to one nap so that Henry and Alice would be on the same schedule, but alas, that was a fail. This kid loves her sleep!

At the end of the day, I try to get home by dinner and often can sneak in a little play time in before bed. I always try to be the once to give the kids a bath (usually with wine for me if I’m off-call), then we read on the couch with Alice’s bottle before we do our teeth then it’s in bed by 6:30-7pm. I often try to rock her or snuggle her, but she really is not one for cuddles and literally reaches from my arms to her fleece. So putting her down for the night actually takes 20seconds. You just put her down. That’s it! Then she snuggles her fleece and babbles a bit before snoozing all night.

Thankfully, ever since 3 months, she has been the BEST sleeper. I can count on one hand the number of times she’s woken up in the night since 3 months. It’s pretty amazing! 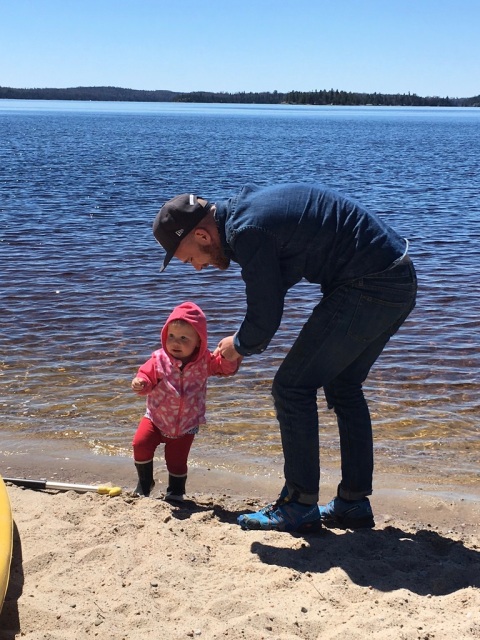 As for Henry, he’s becoming more and more expressive as the months go on. I’ve started writing down his sayings because they are hilarious! Of course he has his toddler moments, but overall, he’s pretty good and gets along with Alice surprisingly well. Not shockingly, he is quite particular about most things and likes his toys ‘just so’ and does NOT like it when his hand are dirty!

These days, he goes to daycare pretty much full time at an awesome day home in town which he loves. I usually drop him off when I go to work and he always sends me off with a big hug and kiss. His naps haven’t changed in over a year and he still has a giant nap from 1-3:30/4pm in the afternoons. Bedtime for awhile was super stressful as the days were longer and lighter just at the time he learnt how to break out of his crib. Thankfully the three hour bedtimes and 5am wake-ups have disappeared although he now goes to bed later (8-830pm) which means our kid-free evenings are getting shorter and shorter!

Putting Henry to bed these days is the best. Tonight he even asked to go to bed and will say, ‘Mom, want to sleep with me? I have a spot for you!’ Of course I lay down and snuggle in his crib to sing to him and it’s all I can do to stay awake!

So far, our summer is going to be very low-key. We haven’t planned any vacations and will be staying put on the shores of Abram Lake until the Fall. My favourite kind of summer!

Prior to opening weekend (aka May 24), Blake did a great deal of work on our 30 year-old boat to get up back in the water. I’m so thankful that he’s handy! We’ve been doing lots of fishing and have been enjoying loads of fresh walleye for dinner. I love summer here! 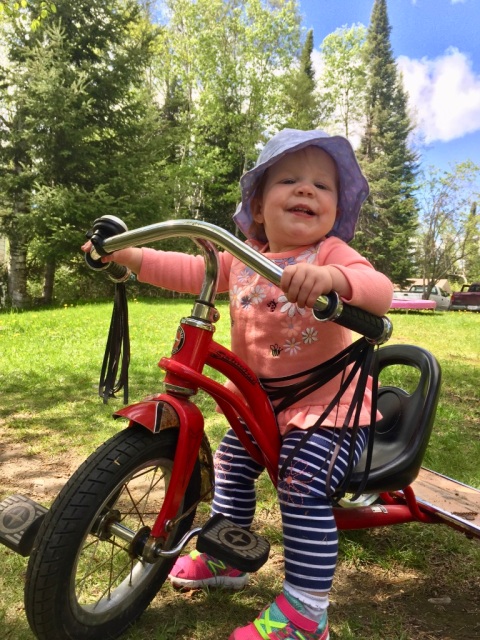 ← The Joys of Camping (and Happy Father’s Day!)
Women in the Wilderness →