Posted on December 13, 2015 by lifeonabramlake

With cappuccino in hand, I sit in the Billy Bishop airport in Toronto, awaiting my flight back home to Northern Ontario. My good friend and colleague, Megan and I have been in Toronto for the past 5 days for a conference and a course on emergency procedures in obstetrics. It’s the longest I’ve even been away from Henry since he was born and the longest I have been on my own in over a year.

For the non-parents out there, this may not seem like something of significance, but it has been like I have entered into a different world. One that I had completely forgotten about. One of utter selfishness. On the plane to Toronto, I actually was able to have a drink and eat a snack WITH THE TRAY DOWN, go to the bathroom ALL BY MYSELF and go through security in record-breaking time. Once in Toronto, Megan and I dinned, shopped and even went to the SPA! Not once did I haul around a diaper bag or think about nap or bedtimes. It was so foreign to just go wherever I wanted, whenever I wanted without consideration to anything or anyone other than myself.

Although it has been, in many ways, a wonderful little break, I wouldn’t trade a lifetime of pedicures to go back to my life before becoming a parent. Not a moment has gone by throughout the past few days where I haven’t been thinking about Henry and Blake, wondering how they are doing, what they’re up to and if Blake is remembering to brush Henry’s teeth. On multiple occasions, I have gotten teary-eyed while flipping through my phone, looking at pictures of Henry, and I’m sure Megan is getting sick of me blabbing on about Henry’s new words, how he’s discovered his belly button and so-on. I can hardly wait to get home and squeeze Henry tight.

Since his first birthday, Henry has continued to change and grow in many new ways. I know I’ve said this before, but one of the greatest joys of being a parent is watching your child learn and discover new skills right before your eyes. I can almost see the synapses firing and the connections being laid down in his brain.

Recently, his biggest leaps have been in the language department. While Henry has been babbling and saying Dada, Ada, etc. for quite some time, three weeks ago something suddenly clicked in his brain. We were reading before bed, as we do every night when I was pointing at a picture and saying ‘ball’. Henry suddenly went still, looked at my mouth as I repeated the word, then parroted back, ‘ball’. His face lit up in a huge smile as I congratulated him as he continued to repeat this new discovery. Since then, his vocabulary has really taken off. He now says: shoes, socks, hat, hot, toes, hi, Momma, Dada, Ada, done, please, etc. He points out his teeth, eyes, nose, toes and bellybutton when asked. His receptive language sills are also developing, probably more than I can even appreciate. If you ask him if he would like to listen music, he will immediately start dancing. He knows what’s coming when I tell him it’s time to brush his teeth and he will look for Ada if you ask him to find her. 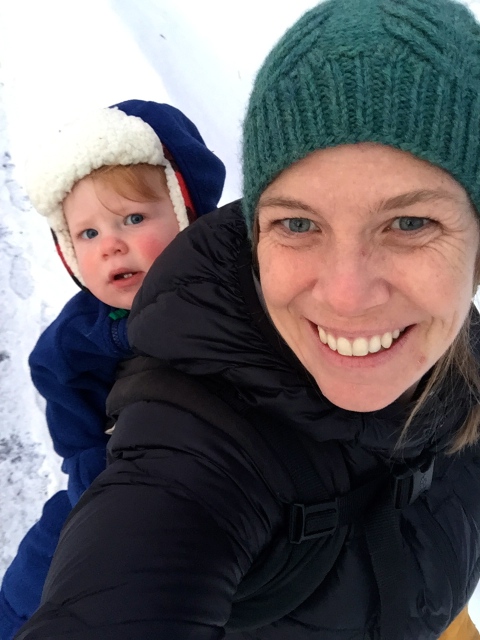 Henry is also starting to learn the meaning of ‘no’. Just recently, Blake and I were eating dinner while Henry cruised around the kitchen, pulling the cupboards and drawers open and spilling their contents all over the floor – his most favourite pass-time. He then discovered the drawer where we keep Ada’s dog food. Somehow, he managed to open the tupperware and get his chubby hands into the kibble. We discovered him standing up, one hand on the drawer with the other grasping a mittful of dry dog food. Ada was standing nearby, looking perplexed. Then we realized that he had gone as far as sampling the kibble!! Blake said, ‘No, Henry!’. He regarded us with a serious face, shook his head slowly back and forth, mimicking Blake, then dropped the handful of dog food back in the bin. ‘That too!’, said Blake, pointing at Henry’s mouth. Out came a dry kibble which was also returned to the bin! What a character!

In the motor department, Henry still hasn’t taken his first steps, but this hasn’t slowed him down. He continues to scoot around the house, climb up and down whatever he can, and crawl in and out of cupboards. Who needs toys when you have a lazy susan! 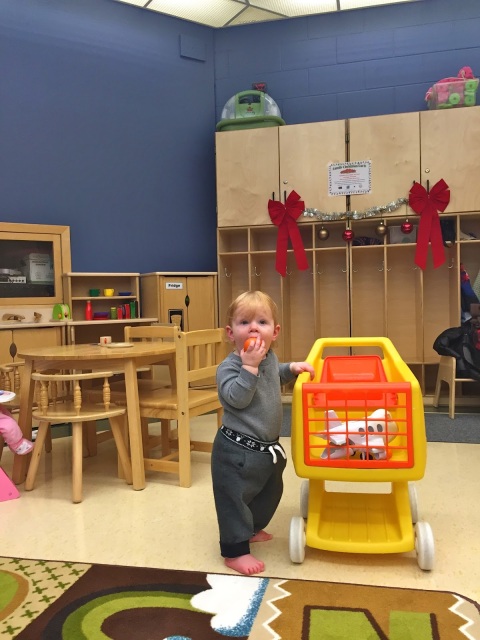 As my pregnancy zips along, I am finding it harder and harder to be lifting Henry, getting up and down off the floor, doing squats to pick up various things while Henry’s on my hips, etc. My pregnancy with Henry was such a breeze. I often forgot I was even pregnant! This time around,  my body is definitely protesting a little. These days, I go do bed with an electric heater for my back and often lay awake in the wee-hours as this little life inside of me kicks and squirms around. It is exciting to think about how life with change yet again when we welcome this little sister or brother in the Spring.  At least this time I’ll have more of a mat leave as I hope to take off at least six months to be home with the our two monkeys! We’re going to be busy on Abram Lake!

← The Sleep Obsession: Part 2
Walking in a Winter Wonderland →